THC is the chemical that gets you high. THC changes the amounts of pleasure in the brain but can also provoke a ‘fight or flight’ response leading to anxiety.

CBD works on the pain and mood management areas of the brain. It can balance out some of the harsher sides of THC. This doesn’t make it completely safe. 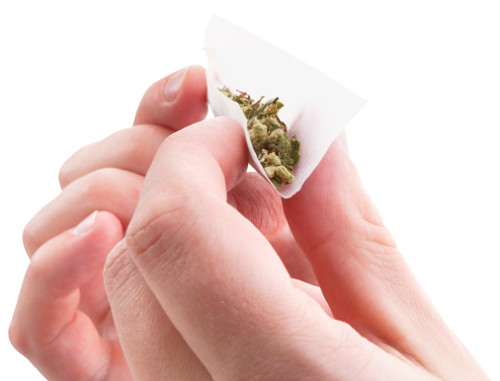 Is cannabis getting stronger?

Police seizures of high potency cannabis have increased. In 2005 51% of cannabis seized was high potency, this increased to 94% in 2016.

The THC to CBD ratio has changed in cannabis resin. According to the same report, in 2005 it used to be 1:1 now it is 3:1. Three times more THC than CBD. This means that it can have a bigger impact on people’s mental health.

Bloodshot eyes, relaxed and expanded airways, an increased heart rate and a drop in blood pressure.

Using cannabis can cause nausea and vomiting, especially in those who are not used to it.

Cannabis can impair your response times, making it unsafe to drive, ride a push bike or operate any machinery. This is why the police and many workplaces now test for cannabis.

Negative
Cannabis with higher THC content can produce anxiety. Your mood and circumstance can mean that you could also experience confusion, hallucination and/or paranoia.

Some users can have severe negative symptoms such as hearing voices, seeing things that aren’t there or having strange unsettling thoughts or beliefs. You may need immediate help if you are experiencing this.

A 2019 study in the journal Lancet Psychiatry found the chances of having a psychotic disorder were 40% greater among those who used the drug more than once a week compared with those who rarely, if ever, used it.

If you have had symptoms of mental health issues, using any mind-altering substance increases your risk of a related negative experience in the short and long term.

Yes, it is. For years it was thought that cannabis had little to no potential to be addictive, however, recent research suggests it is.

You can also experience physical and psychological withdrawal symptoms

When should I consider changing my cannabis use?

Tips for reducing or keeping in control.

Forward Leeds can provide confidential, non-judgemental advice and support to help you make changes to your cannabis use.

For help in stopping smoking – One You – http://oneyouleeds.co.uk

Download our  #RespectTHC posters by clicking on the images below:

We have a downloadable booklet that is a guide to cannabis, starting with the facts.

Working through the booklet lets you take a look at you and your own cannabis use.

Looking for help for yourself or someone else? Get in touch with us

Forward Leeds is the new alcohol and drug service in Leeds for adults, young people and families. We offer a range of services from 9am-5pm, Mondays and Fridays and 9am-7pm Tuesdays, Wednesdays and Thursdays.

FOR YOUNG PEOPLE SUPPORT FOR FAMILIES FOR PROFESSIONALS ONLINE REFERRAL

We use cookies to ensure that we give you the best experience on our website. If you continue to use this site we will assume that you are happy with it.Ok