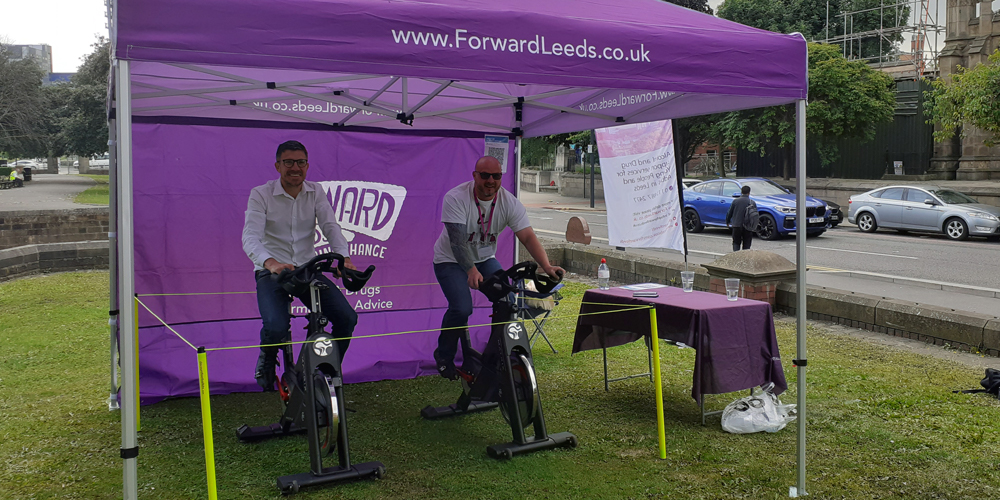 The city’s drug and alcohol service is working together with the Hepatitis C Trust to raise awareness of the virus and encourage people to get tested.

In the three days up to and including World Hepatitis Day on the 28 July, Forward Leeds and Hepatitis C Trust staff and volunteers are testing how far they can cycle on exercise bikes in the park opposite Leeds Minster.

This is to support the Hepatitis C Trust’s Around the World campaign. A challenge to walk, run, cycle, wheelchair, swim, row or even roller skate the 24,901 miles circumference of the Earth.

One of those cycling is the Assistant Director of Forward Leeds, Nick Rank. Nick said: “It is great to be working on this with partners from across Leeds especially the Hepatitis C Trust. Our real aim is to get more people tested and treated for Hepatitis C. It builds on the success the city has already had with our Don’t Live in Doubt campaign.”

During these three days the Trust is also testing anyone who wants to get tested for hepatitis C, there and then in the park. Forward Leeds staff are also available to speak to people about hepatitis C and any other concerns they may have about alcohol or drugs.

Cllr Arif, the Executive Member for Public Health & Active Lifestyles at Leeds City Council, said: “World Hepatitis Day is a great way of raising awareness of Hepatitis C and encouraging people to get tested. There are now new treatments available across Leeds – including at any of the Forward Leeds hubs – which are more effective and have far fewer side effects than previous treatments.”

Also joining in the cycling will be members of Leeds City Council’s Public Health team, staff from St James’s Hospital and directors from other local and national charities including BARCA-Leeds and Humankind.

West Yorkshire Peer Coordinator for the Hepatitis C Trust John Fox is also one of the team of cyclists. John said: “2021 is the 20th anniversary of the Hepatitis Trust and it is also the 10th anniversary of World Hepatitis Day. That’s what make it extra special that we’re all coming together this week, Leeds Council, Forward Leeds, ourselves to raise awareness of just how important it is to get tested and treated.”

Hepatitis C is carried in the blood. It affects the liver by preventing it from working properly by infecting the liver cells and causing inflammation.

There are an estimated 150 million people worldwide chronically infected with hepatitis C. The level of infection in the UK is believed to be around 0.5%. The virus can only be transmitted by infected blood.

If left untreated, 20–25 percent of infected individuals will develop cirrhosis of the liver. Cirrhosis increases the risk of developing liver cancer, which can be fatal.

Untreated hepatitis C can also cause a range of other symptoms, such as: muscular pain and achy joints, pain in the abdominal and liver area, fatigue, depression, headaches, difficulty concentrating, loss of appetite, nausea and weight loss.

Hep C can be treated and, in most cases, it can be cured with a simple course of tablets.