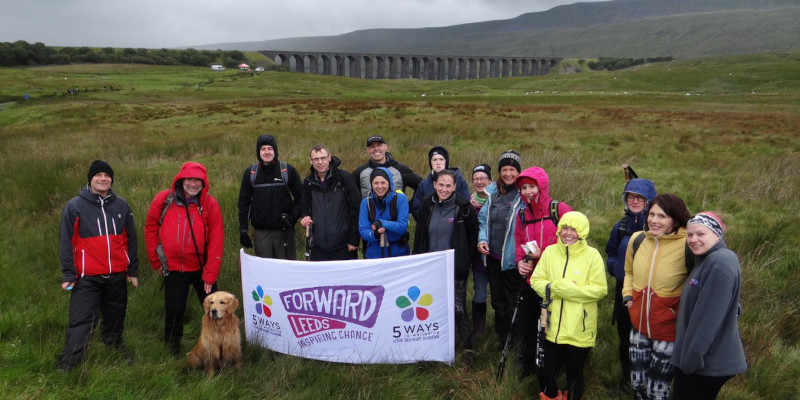 A team of Foward Leeds staff raised £2269 for our Family Plus service.

They climbed the three highest peaks in Yorkshire, despite being battered by rain and gales. The team of 14 set off from Horton in Ribblesdale at 7.30am on Saturday 5 September and walked the three peaks clockwise, first Ingleborough then Whernside and finally Pen-y-Ghent. They arrived back at Horton just after the sun had set.

Drug and Alcohol Worker Kathryn Blackburn, who had the original idea for the challenge, said: “I wanted to do this because when I was supported by Forward Leeds for my drinking four years ago, the Family Plus team were such a big help to me and to my son, who was nine at the time. I was really pleased so many of my colleagues wanted to join in and were so enthusiastic. It was a real team effort to conquer to get around those three peaks.

“It was an exceptionally challenging day. I don’t think many of us thought it would be quite as tough as it was, with the weather not working in our favour and unexpected rugged terrain with almost sheer drops on some descents.

“We were lucky to have an experienced climber in our Clinical Director Dr Mark Hallam, who guided us up and down through the wind, mists and rain. But when push came to shove, it was a tremendous all round team effort to make it to the end.”

The team high up in the mists

Ready to set off

Climbers in the mist

Kathryn continued: “It all feels worth it, though, when we now look at the money raised so far. That money is going to be able to help so many children at a really difficult time for them and their parents. We would like to personally thank everyone who has donated money so far.”

The usual Yorkshire Three Peaks route is 24 miles (38.6km), and includes 1585m (5200ft) of ascent but due to ongoing works in the National Park the team had to take a slightly longer route.

The Family Plus service is about getting early help. They work with familes to provide a rounded package of support. Family Plus ensure the best possible outcomes for the children as well as supporting parents through their recovery journey.

Sheltering from the rain and wind

(l to r) Kirkgate Market Manager Steve Mason, Malcolm Leary and Danny Malin of Malcolm Michaels Butchers and Georgina Davis from the Family Plus team at Forward Leeds
Love it 0

Danielle O’Connell has been appointed as the new Volunteering Development Coordinator for Forward Leeds. Danielle…

Shaar Jackson, who receives support from Forward Leeds for her issues around alcohol, had her…

Kathryn with son Zac
Love it 0

A team of fourteen from Forward Leeds, the city’s alcohol and drug service, aim to…

Forward Leeds, the city’s drug and alcohol service is helping to raise awareness of how…